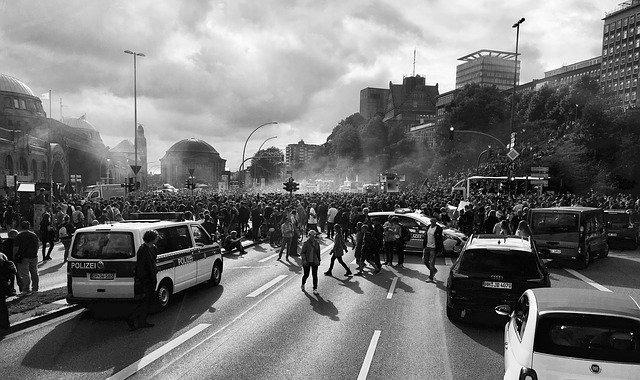 Given the current riots, mob mentality, and cancel culture that are sweeping across America, now would be a good time to reflect upon the fundamental principles on which our culture rests. Western civilization is rooted in a Judeo-Christian tradition. Historically, in Western communities the Bible was understood as being God’s Word. As such, it provides instructions on how each individual person is to manage the affairs of his or her life. Moreover, it also admonishes individuals to be very careful about intervening in the affairs of others. We would do well to revisit these principles in light of current events.

In the Old Testament, there are extensive instructions on how someone should live. For example, the book of Proverbs is intended to provide any young person with the wisdom needed to make good decisions in life. The same theme is carried over in the New Testament, which repeatedly instructs the reader to practice self-discipline. For example, in his second letter to the church, the Apostle Peter admonished his readers to, “add to your faith virtue, to virtue knowledge, to knowledge self-control, to self-control perseverance, to perseverance godliness, to godliness brotherly kindness, to brotherly kindness love.”[i] The progression he made in these verses assumes that a person acts of his own accord and is thus self-determined. That is, the individual person is free to choose, but is responsible for the choices that he or she makes.

This essential truth has fallen out of favor today. Instead, the popular view today is that the person is just another animal with no particular value or dignity. This has resulted in the rejection of the concept of freedom of choice and responsibility for one’s choices.

Consider for the moment how the Christian view changes everything. Christian anthropology overarches the entirety of the Scriptures. On this basis, Christian scholars have advanced theories about social relationships that have led to the development of various societal institutions. Among these, is the concept of sphere sovereignty (subsidiarity), which provides some overarching guidelines to govern social relationships. In his lectures on Calvinism, Abraham Kuyper developed the concept and applied it to the various areas of life.

The idea of sphere sovereignty is straightforward enough. Namely, it is argued that each person is created in the image of God and is both rational and volitional. On this basis, it is asserted that people are free to choose their own course of action. However, they are not free from God or from His moral judgments. Therefore, everyone is subject to the consequences of their actions and those consequences occur in one of two forms.

First, the Bible argues that God has created a moral universe and that He has established principles such that certain actions invariably result in certain consequences. As the Apostle Paul put the matter, “Do not be deceived, God is not mocked; for whatever a man sows, that he will also reap.”[ii] This form of Christian thought recognizes a moral order or the existence of a “natural law” that cannot be compromised without leading to certain inevitable consequences. These penalties are understood as warnings by God against the continuation of certain actions and people who suffer the costs of their imprudence or immorality are advised to change course.

Apart from the personal suffering that occurs due to imprudent and immoral pursuits, the Bible also addresses the problem of behavior that imposes costs on others. In this case, the Scriptures call for solidarity of human action in the form of collective punishment and this gives rise to a purpose for government in society. Toward this end, sphere sovereignty recognizes the role of government to punish wrong doing in order to secure the common peace so that the perpetrators of evil are the ones who are made to suffer.[iii] Biblically speaking, the failure to execute such punishment would result in injustice and give the appearance that evil is rewarded while good is made to suffer. Thus, when societies allow lawlessness and fail to effectively pursue just punishment for crimes committed within them, they are harming themselves and exposing themselves to the potential of bringing about their own destruction.

Given this understanding of human nature and of the purpose of government, Kuyper began to advance the notion of sphere sovereignty. The idea being that each individual ought to lead his or her own life and govern one’s own affairs while bearing the responsibility for one’s own actions. Moreover, it would be a violation of human dignity to arbitrarily interfere or meddle in someone else’s life without their consent or without some overriding reason. On this basis, Christians were admonished to mind their own business. For example, in a letter to the Thessalonians Paul warned his audience, “If anyone will not work, neither shall he eat. For we hear that there are some who walk among you in a disorderly manner, not working at all, but are busybodies.”[iv] On this basis, the only need for unsolicited intervention in someone else’s life would occur when that person had fallen into gross sin that significantly spilled over to the detriment of others.

Accordingly, this form of Christian thought provides guidelines controlling the intervention into someone else’s life. By recognizing the human dignity of the person as someone made in God’s image, the pattern of intervention is implicitly understood to be of a temporary nature. Moreover, the extent and nature of the intervention ought to follow some pattern that extends outward from the individual himself. Thus, those in closest contact to the person would be the first to intervene in his or her life. Other people and social institutions in society would only need to get involved to the extent that such earlier involvement was ineffective. Therefore, other social institutions would be the next logical step of intervention needed to resolve the problem. Generally speaking, the state is the last institution called forth to intervene in someone’s life and its role is largely negative in that it acts to punish wrongdoing. Thus, it is the institution of last resort.

Another important component of Judeo-Christian thought is the concept of original sin and human depravity. Throughout the Scriptures, human beings are described as sinful people who constantly go astray. As a result of their disobedience toward God, they invite God’s judgment. Indeed, apart from God’s grace and mercy, people should expect only His wrath. The main message of the Bible is that God does provide such grace and mercy in the atoning sacrifice of Christ.

This teaching is crucial to Christian social thought. Anyone attempting to think consistently within this moral tradition never expects a utopia. Rather, recognizing our own failures, we expect others to fail as well and, therefore, we expect that life in this world will always be less than perfect. In addition, the recognition of one’s own failures, coupled with the expectation of God’s forgiveness, ought to motivate us to be willing to forgive others for minor offenses they have committed against us.

The Bible itself instructs the Christian to practice such grace and mercy toward others as a matter of daily life because this practice is an affirmation of God’s own merciful disposition. The importance of this teaching is that the practice of such mercy and grace greatly limits the amount of government intervention as people seek to rectify the issues of injustice in society. Furthermore, this understanding of the world results in a rather low expectation of government’s usefulness.

Beyond this, it also recognizes that the institution of government itself can be turned to unjust purposes because sinful governmental authorities can misuse the power. Indeed, the concentrated power of the state may be the easiest means of busybody meddling in the affairs of others. That is, imposing upon others what someone else might think of as the good life. In addition, using government power is the easiest way of violating the individual’s human rights. This is because the institution meant to punish the wrongdoing is now the institution that pursues the wrongdoing.

In this regard, the Bible is very realistic. For example, in Deuteronomy, the writer admonished the governing authority to keep a copy of the Scriptures handy and to meditate on them every day.[v] The implication of the passage was that the ruler executed his duties under the law of God and was bound by God’s law. Therefore, if he attempted to establish himself above all others, or to institute unjust laws, he was essentially calling forth the judgment of God upon himself. As Kuyper stated the matter, “No man has the right to rule over another man, otherwise such a right necessarily, and immediately becomes the right of the strongest… Nor can a group of men, by contract, form their own right to compel you to obey a fellow-man.”[vi]

Thus, Scripture lays out many clear guidelines for wise social interactions. While the state is given as an institution aimed to secure peace and order in society, it is also an institution that can easily be perverted and used to destroy the God-given liberty of individual choice. People in the United States today are expecting far more from government than it can possibly deliver. The result is that they are promoting a mob mentality. People begin to believe that if they can’t get their way politically they have a right to riot in the streets and destroy the property and the lives of those around them because of perceived disagreements and supposed injustices, real or imagined. Put simply, this mindset is destroying civilization.

[iii]  In the 13th chapter of his letter to the Christians in Rome, Paul outlines this purpose of government. Specifically, the Apostle argues that government is instituted among men by God for the purpose of “punishing wrongdoers” who might otherwise go free to commit their crimes anew.